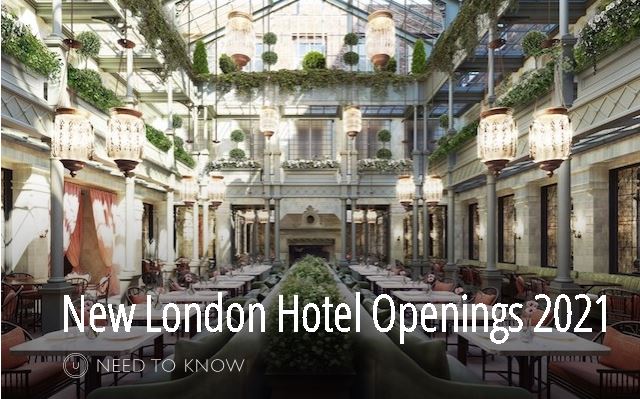 The spate of trendy new hotel openings this year is set to continue with the announcement of several exciting new upcoming additions and launches.

The country house hotel Beaverbrook is teaming up with Cadogan Estates to open Beaverbrook Town House on Sloane Street, Chelsea. Planned for summer 2021 debut, the highly anticipated property will be realized through the £25 million restoration of two Georgian townhouses opposite Cadogan Place Gardens. On completion, the 15,000-sq-ft boutique hotel will house 14 luxurious suites, which are all styled and named after celebrated London theaters. These rooms will be joined by a contemporary Japanese restaurant and bar with interiors inspired by the iconic work of 19th century Japanese artist Hokusai and views of Cadogan Place Gardens. The project is led by interior designer Nicola Harding and Beaverbrook’s creative director, the advertising guru Sir Frank Lowe.

Hôtel Costes, one of the hippest and super-chic hotels in Paris is coming to London. The elegant (and infamous) hotel in Paris’ 1st arrondissement, by visionary designer Jacques Garciais and owner Jean-Louis Costes; is set to open a new outpost in Chelsea; taking over (and revamping) a Victorian apartment building (at One Sloane Gardens) on the corner of Sloane Square. The (sure to be decidedly opulent) 40-room boutique hotel is in conjunction with Cadogan Estates and is slated to house a roof top bar and restaurant. The property (Jean-Louis Costes first project outside Paris) is to reflect “the enduring principles of elegance and individual spirit — capturing the best of the cultural and social milieu of the property’s location and moment in time”.

Quintessential New York urban boutique hotel has its sights set on London. The boutique bolthole group debuted in New York City’s Nomad (meaning north of Madison Square Park) neighbourhood in 2012 and spawned a second outlet in Los Angeles, with a third in Las Vegas. Housed in a 19th century, Grade II-listed building in Covent Garden, which is being transformed into a 91-bedroom hotel with much of the original architectural features preserved and woven into the design. The hotel will comprise an all-day dining space housed in a light-filled atrium and the dining spot pairing NoMad’s signature style with a pub-like environment, Side Hustle. Here, the executive chef Ian Coogan will oversee the creation of sharing plates inspired by Mexican heritage, which are paired with a curated agave-based spirits program. To unwind, guests can head to The Library where coffee, snacks, cocktails and wine are served. The subterranean craft cocktail bar and lounge, Common Decency, is due to open early spring.

The Londoner is being touted as the world’s first ‘super boutique’ hotel, spread over 16 floors betweeen a cosy street-level restaurant and tavern, and a rooftop Japanese lounge bar with a terrace and firepit. The hotel – aiming to be one of the greenest hotels in the country – will house an astounding 350 rooms and 35 suites as well as a six-level basement with underground spa with a 15-meter swimming pool, a two-screen Odeon cinema and a 1,000-capacity ballroom. The interior design team is lead by Yabu Pushelberg, veterans many of the Four Seasons hotels, and project architects Woods Bagot – who were behind Danny Meyer’s Manhatta in downtown Manhattan.

This independent luxury hotel is the first London hotel designed by leading architect and designer Martin Brudnizki, whose previous projects include private members’ club Annabel’s, Sexy Fish and The Ivy. Expected to open in September 2021, this hotel described by Brudnizki as ‘your eccentric godmother’s Soho townhouse’ promises to draw on the creative identity of this London neighborhood. Altogether, the hotel will comprise 57 residential-feel rooms, including nine suites and a luxurious penthouse, of which many have private balconies. The dining concept, which includes a street-level Italian restaurant with terrace and terraced rooftop cocktail bar, will be operated in partnership with the owners of Randall & Aubin.

A ‘RocknRolla’ hotel opening on London’s famous Denmark Street, inspired by the birthplace of the British music scene. The street, well documented in history, is where The Rolling Stones recorded their first album, Jimi Hendrix often frequented, the Sex Pistols once lived, Chrissie Hynde spent time and where many believe, Ziggy Stardust was born. Nicknamed ‘Session rooms’, many of the 55 rooms – set across 16 characterful buildings in and around Denmark Street – have their own individual stories referencing musical history that once took place on the street. Designed by renowned interiors team Taylor Howes, the overall design narrative invokes a time where punk, rock and gothic meets grandeur and psychedelia.

The jet-set design duo behind Yabu Pushelberg are also behind the interiors of Pan Pacific London – marking the Asian group’s first European venture. Set in One Bishopgate Plaza – just across from Liverpool Street Station and housing 237 guest rooms and suites. Facilities include an 18th floor Signature Suite, an 18 metre indoor pool with spa and fitness centre, and a ballroom accommodating up to 370 guests. Also discover plenty of landscaped outdoor space and gardens integrated into the design of the restaurants and communal areas. The hotel’s culinary offering includes Straits Kitchen for Singapore-style dining, Ginger Lily bar and The Orchid Lounge for afternoon tea.

The owner of the iconic Blakes Hotels have submitted a planning application to create a new 30-room hotel in “the tradition of great European art hotels” at three adjacent buildings close to the US Embassy in Grosvenor Square. Plans for the “elegant and creatively intelligent” hotel include an all-day 120-cover Parisian style brasserie (with a contemporary menu based around locally sourced organic and biodynamic ingredients), a private members’ club and bar – aimed at people in the creative sector as well as local Mayfair residents. A Shoreditch venture is also in the pipeline.