At Arvantis, we think that pop-up restaurants will deliver new life and excitement to eating experiences around the world this year.

Over the last decade casual dining has seen a dramatic growth but is now contracting just as quickly. Some famous restaurant names have disappeared recently including chains like the Gourmet Burger Kitchen, Gaucho and Jamie Oliver’s restaurant group. Last year the number of closures was more than 1,400; that’s an increase of 25% compared with 2018.

Economic uncertainty, a saturated market and tight margins have all played their part. Does that mean that diners will have nothing to look forward to in 2020?

We believe pop-up restaurants will continue to turn great ideas into amazing businesses this year. Whether it’s a pop-up residency, a one-off dinner, or cuisine only available for a few days or weeks, we are looking forward to a lot of exciting new food experiences this year.

Part of the attraction of pop-up restaurants is that they can appear almost anywhere – they can be in a mobile catering van, at a street stall or on a rooftop. They can test a concept or start a whole new trend.A short-term restaurant experience allows chefs to experiment with new concepts with less risk than a permanent ‘bricks and mortar’ restaurant. They can explore new audiences and cuisines, prove concepts, raise funds and attract new investors.

Most importantly, they provide existing restaurateurs with an opportunity to experiment without the risk of losing existing loyal customers or the expense of creating a whole new menu.

The time limit also helps to generate interest and excitement. It attracts food fans who are really interested in trying something new and who are happy to give feedback as they go.

In 2016 the furniture giant, IKEA, even experimented with a pop-up restaurant called the Dining Club in its Shoreditch site in London. Diners were invited to create their own meals in a variety of cooking sessions with trained chefs to supervise preparation.

The idea is becoming so current that this year’s Master Chef – The Professionals series included a new pop-up challenge where contestants created dishes for a food stall at Pergola Olympia’s rooftop venue for pop-up food fans. The chefs with the most votes from some of the country’s most successful pop-up entrepreneurs went straight through to the next round.

From inspiration to acclamation
Joshua Skenes launched a pop-up restaurant in San Francisco in 2009. He focussed on wood fire cooking of seasonal ingredients. Building on its popularity, the concept was later relocated to a permanent home as Saison, which now has three Michelin stars. 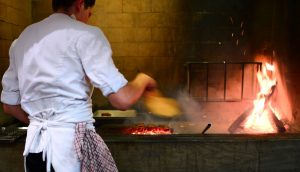 But pop-ups aren’t just for beginners. The Cook Japan Project at Nihonbashi, Tokyo, comes to an end this month. It has featured residencies for over 30 internationally renowned chefs such as Julien Royer of Singapore’s two Michellin starred restaurant, Odette, and three Michellin starred Yannick Alléno from the Pavilion Ledoyen in Paris and Le 1947 at Cheval Blanc in Courchevel. The project has provided an opportunity to showcase Japanese ingredients, reinterpreted by the world’s leading chefs.

Daring to be different

McDonald’s even used the pop-up concept for a single day to promote its Signature collection. Its High Street Kensington store had a plush makeover of velvet drapery with table service, gold cutlery, and a string quartet for the reservation-only event.

Delivery companies are also exploring the potential of pop-up restaurants. In 2018 Deliveroo launched a campaign for new food traders to showcase their work for 12 weeks, with the opportunity to become permanent partners on Deliveroo Editions. In the first Deliveroo Awards this year the best Pop-up to Prime-time prize went to FreshMex in Aberdeen, who originally teamed up with them in 2016.

The 2019 Riyadh Season in Saudi Arabia brought cuisines from around the world in its ‘Taste’ theme, part of more than 3,000 activities and 100 events to attract people to the area.

More than 30 restaurants opened pop-ups across the city. Although the Season was due to end on 15 December, it has been so popular that it has been extended to run until the end of January.

We’re looking forward to seeing the new innovations and trends that pop-up restaurants will bring in 2020.

Richard Kingue Kouta is Managing Director of Arvantis Hospitality, a leading hospitality talent search partner, and keen observer of new developments and trends in the sector.